If you live on Martha’s Vineyard the most common fuel sources are Propane and Oil, oil having been the most commonly used for decades not to mention the most efficient (BTU) heating source.

Before I discuss the problem I want to explain that Martha’s Vineyard Island is a very fragile ecosystem relying on a common aquifer for its drinking water. Once that aquifer has been compromised to the point that it is no longer potable – suitable for drinking, life will change.  I am not saying we are doomed, but our quality of life will suffer significantly.  Right now, today, we are still in good shape and I know my drinking (well) water is delicious.

We have done a lot to protect the ground water with the implementation and regulation of engineered Title 5 waste water systems and limited expansion of the sewer system networks, but that is topic for another conversation.

First of all, residential “consumptive” use fuel oil storage tanks are not regulated by the Federal Government.  The Fed focuses on the commercial sector because the fuel containers are huge (e.g. gas stations, etc.) and the consequences of a breach would be catastrophic.  Normally, for residential consumption, whether the oil storage tank is above or below ground the capacity is between 275 and 288 gallons.

In my two and half decades in the real estate business on Martha’s Vineyard I have witnessed some very unfortunate costly mishaps concerning fuel oil storage tanks.  For example, two 275 gallon single wall storage tanks above ground connected in series; one tank begins to leak and siphons the second tank’s contents out and into the earth below.  Why did no one notice what was happening? Because the owners were absentee seasonal occupants like so many other property owners on Martha’s Vineyard. The area had to be excavated and all – I mean ALL, of the contaminated soil had to be removed, and then it had to be carted off-Island to an approved disposal center for HAZARDOUS WASTE materials.  Would you like to guess how much that cost?  In another situation a tank leaked in a basement in a heavily populated area. The basement had to be excavated as did a portion of the exterior beyond the foundation. Soil samples had to be taken not only at the subject property but for the properties abutting the area of the fuel oil spill.  Also, the contaminated earth had to be packed into dozens of large storage drums for transfer off Island. Would you like to guess how much that cost? 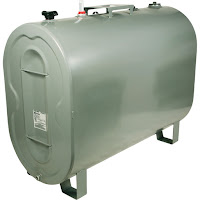 Single wall steel fuel oil storage tanks have been used since before I was born, but they don’t last forever and like everything else it seems, the quality has diminished.  Normally, the wall thickness of a 275 gallon single wall tank is 12 gauge but when “off shore” tanks were introduced into this country, quality control suffered.

Thus, the introduction of the ROTH stainless steel “double wall” fuel oil storage tank. However, they are not cheap. You can buy a single wall 275 gallon tank for about $1000.00, whereas a ROTH tank will cost you triple that amount – but you will have it forever, if there is such a thing.

Is there an alternative or “band aide” if you don’t have $3500?  There is a company, Boston Environmental that has been administering the TankSure Program inspection services for a number of years.  I recently observed a demonstration and I have to admit, even though this is a serious matter, it made me chuckle. Why? Because it reminded me of a pregnancy ultrasound. First they smear some clear jell on the transducer probe that is used to send and receive sound waves, then they move the probe around, usually to 10-12 locations along the lower tank wall while reading the measurements on a digital display. 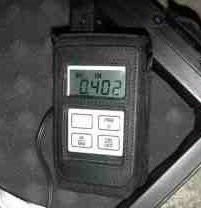 Through analysis the condition of the tank is rated.  The generally accepted minimum wall thickness measurement to pass a tank is 0.100”.  If the average is significantly less than that the tank will fail the inspection.

Some companies offer incentives and a limited warranty, but in my opinion there are no guarantees even though the tank passes the test.  If the test results are marginal you may be advised to have the tank replaced or at the very least tested every year. Some fuel oil companies may even refuse to fill a tank that is below the accepted range.  What do I tell my Buyer Clients? REPLACE THE TANK with a ROTH tank. 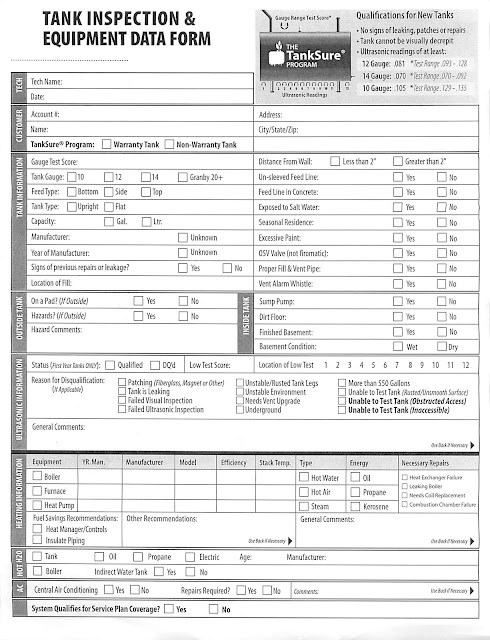 So, if you are as concerned about contamination to our aquifer as I am and you heat your home with fuel oil but cannot afford to replace your single wall tank right now, what should you do?  You can start by being proactive and contract with a fuel oil company that is also proactive.  Currently the first service provider on Martha’s Vineyard to offer the TankSure Program for oil tank & equipment inspection services is Island Energy, Inc (www.islandfuelinc.com).  Give them a call.  Jay McMann is the President and he can be reached at (508) 696-5959.

For more information, Mass.Gov has a great section under Energy and Environmental Affairs:  RemovingYour Underground Heating Oil Tank - A Homeowner's Guide
Posted by Unknown at 12:41 PM No comments: