The Housing Slump Isn't Over Yet After All.

The beginning of 2007 took off with a flourish of sales activity. Shrewd investors took advantage of market uncertainty successfully negotiating good buys for many of the better properties here. The prediction of low and stabile interest rates and a strong economy suggested a turn around in the housing market was eminent. Then came the subprime lending fiasco which had an overall negative effect on the market.

Sellers, realizing the pool of “qualified buyers” had shrunk over night finally started making serious reductions in home prices, but there were very few qualified buyers. Therefore, the typical spring flood of properties back onto the market was met by buyers unable to make a purchase or reluctant to do so believing the downturn was not over yet.

The balance of supply and demand at the lower end of market continues to be heavily weighted toward the supply end. Here is an article that appeared in this week’s Boston Globe that addresses the fact that the housing slump isn’t over yet after all.

However, at the high end of the market, where the ripple effect caused adjustments on some prime properties, well-heeled buyers fueled by generous bonuses from the financial market are carefully picking at the prime luxury properties.
Posted by Unknown at 9:09 AM No comments:

Is Your Property Eligible for a §1031 Tax Deferred Exchange?

Since Martha’s Vineyard is a vacation community, many properties are purchased for investment purposes and not as primary residences. Therefore the Section 1031 Tax Deferred Exchange option (also called Starker exchange) is especially intriguing and ideal for many investors.

Many media articles, dozens of websites and some real estate agents are quick to pontificate offering themselves up as §1031experts, but not giving a clear or complete picture of the §1031 exchange process. It seems many taxpayers believe they can exchange a vacation home at any time and that’s just not the case” says Tom Oldfield, attorney and partner in Olympic Exchange Accommodators based in Washington state.

I believe the process is too dicey and very complicated. It is constantly changing and has many sensitive factors and critical pitfalls that can make or break a deal. As a real estate broker and exclusive buyer agent, my duty is as a facilitator to my principal; I am not an accountant or tax advisor, attorney or qualified intermediary (QI). I have relationships with several good QI’s and will refer and assist anyone interested in pursuing a §1031 exchange. According to David Greenberger, an attorney and California licensed QI, here are some questions a taxpayer should be asked when contemplating the purchase of an investment property:
· Are you considering selling or buying any property for investment or business purposes?
· Are you considering putting any of your equity from one property into another?
· Are you considering selling any property and buying any other property within 6 months of each other?
· Can I put you in touch with an accommodator who can give you basic information and guide you through your particular facts and situation?
· Do you need further advice or information from a tax advisor?
· Have you got a clear plan for your real estate?
· Should you be considering new categories of real estate or regions for your replacement properties?
· Should you start looking for replacement properties now so that you give yourself more time than the prescribed 6 months from close of the relinquished property?
· Are you aware your deposit for the replacement property may come from the exchange account you set up once you have sold your first property in the exchange?
· Should I follow up with you once you have closed on your replacement property to track performance and help you decide whether you might want to enter into another exchange on additional properties you may own or to discuss a reverse exchange when new properties become available?
Posted by Unknown at 9:02 AM No comments:

Tear It Down or Renovate It: A Growing Dilemma For Home Buyers.

For quite some time I’ve been chanting that it’s time to let go --- let go of the notion that a 70-year-old house has enough charm and redeeming factors to be worth saving.

With energy concerns becoming more prevalent and the cost of utilities continuing to escalate, we need to change our thinking here on Martha’s Vineyard. Charm is a relative term and there is nothing charming or attractive about a tiny 70-year-old house with little to no insulation, cramped bedrooms, one bathroom with leaky plumbing and a tiny kitchen that is inadequate by today’s standards on a crumbling wet foundation.

Circa 1900 near Campground, Oak Bluffs 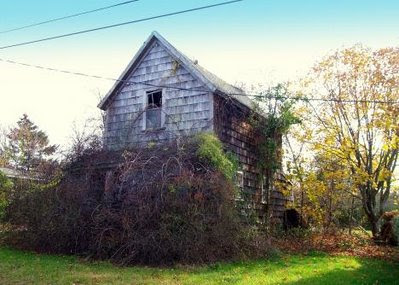 I’d even go so far as to say there is nothing charming or redeeming about some of the houses built during the last 20 to 40 years. We allowed some real junk to be constructed during the 1980’s real estate boom, and a lot of the circa 1970 construction is ugly and functionally obsolete. Aside from the emphasis today on energy conservation, modern high-technology in new homes is also important and advancing at a breathtakingly rapid pace. Today’s upscale consumers want that technology, but they don’t want the kinds of subdivisions typical of suburban America. They want the charm of the Martha’s Vineyard lifestyle because that is what attracts them. But they want that charm to include all the bells and whistles they are used to at home; they want the best of both worlds. The psychographic profile of people moving to the Vineyard is changing and that will make modern in-home high-technology even more important. No longer are we just a summer retreat or retirement community. People come here for a gentler way of life while simultaneously carrying on their off-Island careers.

It might very well cost you more to renovate an older house than to build a new home. So, what’s the answer? I think the eco-conscientious solution is to scrape them, raze them, bulldoze and remove them from the land and start over. Some people call this “Bash and Build”. It may sound shocking, but it’s been happening in other parts of the country for quite a while now. One off-Island builder who has worked on numerous teardown projects in recent years says, “In my opinion, it’s the hottest trend in real estate.” So how do you get this old house off of your nice lot? You can either have the structure demolished, lifted off the foundation and removed in one piece or deconstructed. The latter method which entails reclaiming lumber and reusable building materials will cost you more money and more time than just driving a bulldozer through the front door. Another option is to donate the old structure to affordable housing. It would then be lifted off the foundation and removed in one piece. This sounds like a good idea, but there is a backlog of inventory right now. Let your eco-conscience be your guide. You might also be eligible for a substantial tax deduction if you can donate the structure or the salvaged reusable materials.

Speaking of costs and savings --- it could cost anywhere from $20,000 and up to demolish and cart away the old structure. That cost doesn’t include the foundation, but the foundation material can also be recycled. When the site is clean, you can start from scratch building a new and possibly bigger dream home on that nice lot. In the end you may be paying more “all in” for the finished product, but you will be in a location you want, instead of next door to yourself in a new subdivision without the landscaping intrinsic to older quintessential communities like big trees (to provide screening and privacy). Remember, most of the best locations on this Island are already developed or in conservation. Another factor to consider is financing. If you’re not paying cash, the best solution is to acquire a two-phase loan for a project like this. The first part will be a construction loan which historically will be at a higher rate --- perhaps one-half to one point above prime. You will need a construction contract and approved plans in order to get the loan, but the plans don’t have to be set in cement --- no pun intended. The second part is for the conventional home mortgage. If you’re unable to get your ducks in a row for this type of financing you will end up paying closing costs twice.

We already have a number of cookie cutter subdivisions on the Island, but there are a number of mature small and medium size communities in great locations on the Island where the houses range in size and style unlike the uniformity of modern subdivisions. In off-Island communities it has always been understood one should never to have the biggest home in the neighborhood. But on Martha’s Vineyard that is not a concern. The teardown trend is starting to become more accepted, and inadequate and smaller houses are being replaced with more substantial houses. I am not talking about “McMansions”, nor am I a proponent of them. I believe smart buyers who have identified and moved into the older communities by replacing dilapidated homes with new homes will create an environment for more buyers to come in and build new homes. This will fuel a renaissance in these communities. The land on this Island is just too precious to pretend patch-and-paint houses contribute to the value of the land. 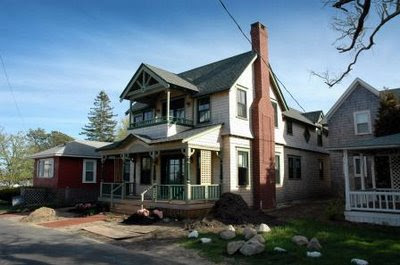 I do think it is critical for neighborhoods to be vigilant and take responsibility for their future well-being. It will be important for residents of these communities to establish home owner associations if they don’t already have them. They need to create covenants to ensure there are safeguards to prevent someone from coming into the community and building an enormous A-Frame glass tent or Quonset hut that doesn’t fit the general character of the neighborhood. Variety is a good thing because it gives character to the community and ensures more expensive homes will blend in visually and economically. This is all part of preserving the future value of your investment and the value of this magical Island we all love to live on.